My very strong feelings about Muppets

I have a tendency to get nostalgic to the point of melancholy. It’s usually an okay place to be. I am, as my friend Frank Youngman once called me, a “feeler”. I wouldn’t want to be otherwise. I like being a feeler. I’ve just got this one life, as far as I know, and I’d like to squeeze as much out of it, emotion-wise, as I can. But, being a feeler can sometimes land me in funny situations. I might, for instance, take my son to see “Emmet Otter’s Jug Band Christmas” in the theater and wind up a soggy pile of tears. Like, that COULD happen…

Okay. That totally happened. My boy’s name is Emmet. Yes, he actually is named for the otter. (Also, in honor of Emmett Till’s incredible, unbelievably strong mother, but that’s another post, maybe). When word got out that Emmet Otter was going to be shown in theaters for the first time, no fewer than seven separate people alerted me to it. By the time the second notice came in, I already had tickets. I took my Emmet to see my very favorite Muppet-related production of all time in the theater tonight. And saying it’s my favorite is really saying something. Because I have very strong feelings about Muppets.

Emmet and me, along with the pig-bear he won from the claw game, and a frightening inflatable anthropomorphized popcorn kernel.

The first thing I can remember wanting to be when I grew up was a Muppeteer. I didn’t want to host the Muppet Show. I wanted to be a Muppeteer. Let some other human have the spotlight. I wanted to be a Muppet. And in high school, when I was tasked with writing a paper about my hero, I wrote about Jim Henson. That’s the first time I tried to put into words why I love Jim Henson and his creations the way I do. This is the second. I’ve really never satisfactorily explained it, even to myself.

Here’s the best I can come up with: I think it’s about kindness, mostly. For me, there is a certain non-saccharine sweetness that lives in the marrow of everything Jim Henson did. That’s most of it. But with the sweetness, there is always the subtle, yet ever-present, rejection of bullshit. If things ever got too cutesy or earnest or serious, there was always a counter-balance. Sometimes, it was a sarcastic comment or a business-like brush-off. There’s a moment in Emmet Otter, for example, when we get both. When Emmet insists they keep practicing for the talent show, Harvey says, “Oh, Mr. Big Time Conductor…” And Emmet, ignoring his comment, just says, “Are you ready, Harvey?” (Ever been in a band? You’ve had that moment…) Other times, it was just Kermit looking vaguely annoyed by the whirling dervishes careening around him. A raised non-existent frog eyebrow. Somehow, that put-upon frog is totally relatable for me. Kermit is my favorite. I get Kermit.

Tonight, what got me was the relationship between Emmet Otter and his Ma. Sitting in a theater watching Emmet Otter, with my Emmet, was almost too much. My kid and I are pretty close. We hang a lot and, at least for the present, he seems to enjoy my company. I’m getting signs that he may not always feel that way. My friends with older kids assure me that he will go away from me some, but that he will come back. Tonight it all hit me like a ton of bricks. And my feelings leaked out of my eyeballs.

Jim Henson. Muppets. They got me. Again. 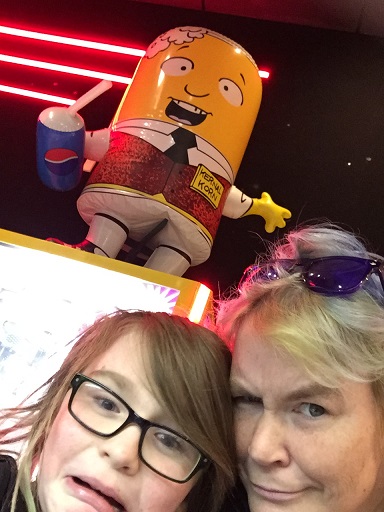